Civitavecchia is one of the most important cruise ports in Italy that also servers Rome. Each year, hundreds of thousands of cruisers begin and/or end their cruise in Civitavecchia, or stop for the day on a shore excursion during their cruise.

Rome and the Roman countryside in the region of Lazio are the closest and most geographically compatible with Civitavecchia, and they offer cruisers and all travelers alike fantastic opportunities to see and explore some of Italy’s most incredible historical, architectural, archaeological and artistic treasures and masterpieces.

From incredible museums to fairytale castles, from Caesars to Popes, from Etruscan to Baroque, this region will overwhelm you with an abundance of unforgettable experiences.

ROME IN A DAY 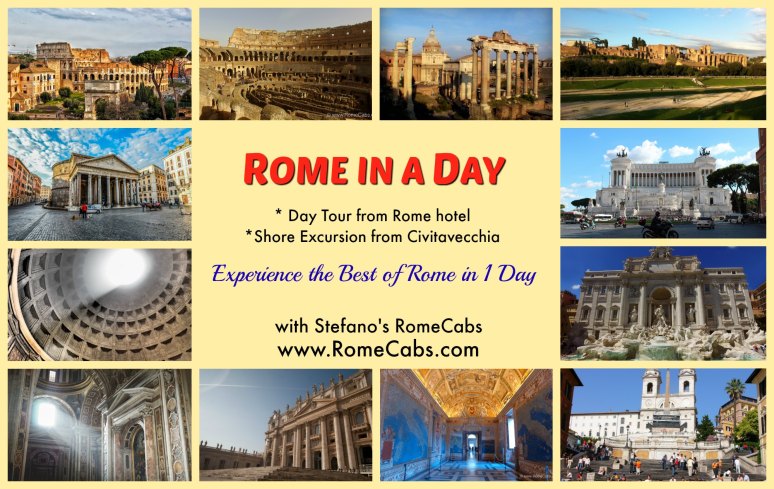 ROME IN A DAY TOUR from Civitavecchia – RomeCabs

Rome was not built in a day, but you can enjoy the main highlights of the Eternal City in a day with Stefano’s RomeCabs.

On this full day tour your morning begins with Ancient Rome as you visit to the glorious Colosseum (the world’s most famous ancient Roman amphitheater!) followed by a postcard perfect view of the Roman Forum from a perfectly positioned terrace on top of Capitoline Hill.

You will continue with a visit to the Pantheon the 1st century AD ancient Roman pagan temple that was converted into a church in year 609 AD and features an enormous coffered dome with an oculus that opens to the sky.

10 Unique Facts about the Pantheon you probably didn’t know

Have a taste of La Dolce Vita with stops at Rome’s most famous squares such as the Spanish Steps with its majestic unfurling stairway,  and the stunning Baroque Trevi Fountain (don’t forget to toss a coin into the Trevi Fountain as tradition holds it would ensure a future return visit to Italy).

After a relaxing lunch at a local restaurant or eatery of your choice, you will visit the smallest country in the world, Vatican City.

Here you will explore the vast Vatican Museums brimming with treasures and masterpieces, the Sistine Chapel that features the glorious frescoes of Michelangelo, and St Peter’s Basilica – the largest and most important church in Christendom.

Following the Vatican visit you will journey back to your cruise ship in Civitavecchia. 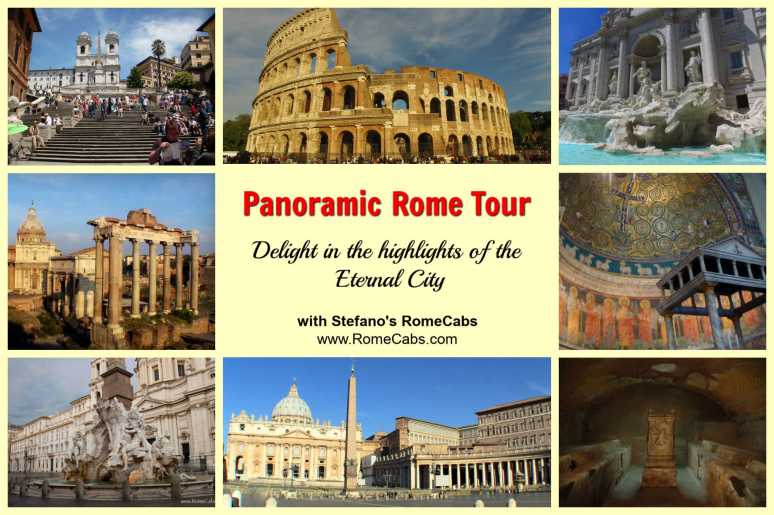 If you are looking for a more relaxing tour that touches on Rome’s highlights and avoids super crowded places like the Colosseum and Vatican that also require advance purchased admission tickets, the Panoramic Rome for Cruisers Tour may be just what you are looking for.

Other exciting stops include Rome’s most renown squares:  Spanish Steps, Piazza Navona and Trevi Fountain, and the Basilica of San Clemente with an Underground visit to remains of the 4th century basilica upon which the current 12 century basilica was built upon, and further below a 3rd century Roman apartment complex with a Mithraic Temple dedicated to the ancient cult of Mithras.  An underground journey that takes you far into Rome’s ancient past is a fascinating and exciting way to end your Panoramic Rome for Cruisers tour.

The Countryside Splendor is the most popular Shore Excursion from Civitavecchia outside of Rome.  Whether you’ve already visited Rome, prefer a more relaxing day without the city chaos, or the idea of visiting castles and ancient cities of the dead fascinates, you, this tour may be the one for you!

Your Countryside Splendor tour begins with your arrival in Bracciano, the medieval village overlooking the pristine volcanic lake by the same name (Bracciano Lake).  The village is crowned by the imposing Renaissance era Orsini-Odescalchi Castle (commonly known as Bracciano Castle).

Bracciano Castle is one of the few castles in Italy that is perfectly preserved and open to the public for visits to explore the 2 levels of exquisite rooms that once belonged to kings, queens, popes, lords and ladies.

Lavishly adorned with original Renaissance era furniture, paintings, frescoes and woodwork, you can allow your mind to imagine the glorious lives of Italy’s illustrious that once occupied these rooms.

A walk along the ramparts will reward you with a breathtaking view of the lush countryside and Lake Bracciano that’s actually a million years’ old volcanic crater that’s also one of Italy’s most pristine lakes.

A traditional Italian lunch at a family owned restaurant in the Medieval clifftop borgo of Ceri is not to be missed.  Perched on top of a cliff rests an ancient fortress that seems to rise right out of the tuffa rock upon which it was built.   It’s narrow medieval street that connects the main square with the world below is so narrow that only 1 vehicle can squeeze through at a time, their passage directed by stop lights placed at  each end of the street.

Following lunch, you will begin your adventure exploring the ancient Etruscan city of the dead at the Banditaccia Etruscan Necropolis in Cerveteri.

Your visit to this UNESCO World Heritage Site will take you on a journy through its acres of  hundreds of actual tombs that date from 9th century BC to 3rd century BC (the duration of the pre-Roman Etruscan civilization before they were conquered by the Romans and absorbed into the Roman culture).

From early circular huts that resemble mounds to complex “modern” square tombs organized like city blocks with roads for procession, you have the unique opportunity to enter many of these fascinating tombs as they were uniquely carved into the living rock to resemble the actual homes of the deceased. 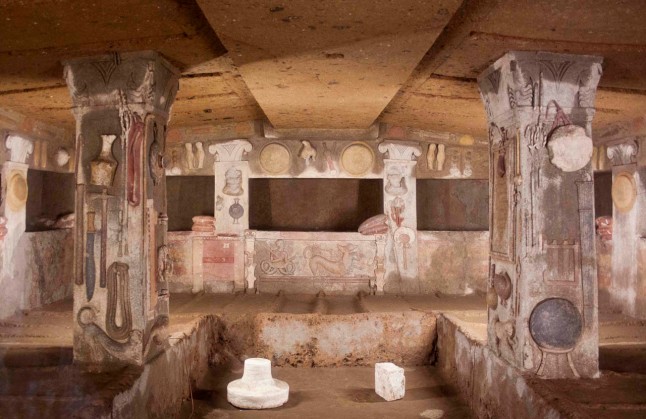 You may not be Indiana Jones, but it sure will sure feel the excitement of exploring ancient tombs and getting a glimpse into the ancient and mysterious Etruscan civilization.

The Etruscan Mysteries take you to the beautiful countryside region where the ancient Etruscans once flourished with important city states that dominated the region as well as the sea.

This shore excursion from Civitavecchia will take you on a journey to Tarquinia – a city that takes the ancient name of the Etruscan King, Tarquinius.
Here you will have the very unique opportunity to visit underground tombs unlike any other in the world because the tombs at the Monterozzi Necropolis are actually painted.

These colorful vivid ancient 4th century BC frescoes offer visitors an incredible look into the vibrant life of the Etruscans: how they looked, how they dressed, what they ate, how they celebrated, how they hunted and the music they played. Nowhere else in the world would you come face to face with the smiling faces of the ancient Etruscans so beautifully depicted in their painted tombs. 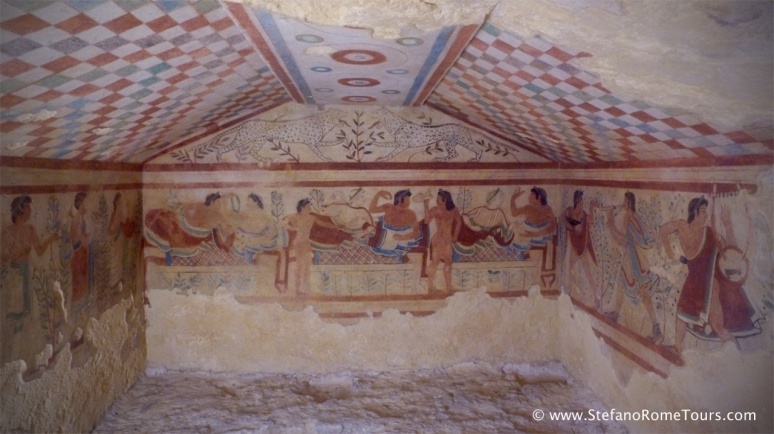 A visit to the Etruscan Museum in Tarquinia also merits a visit as it houses the unspeakable treasures retrieved from the painted tombs. They will amaze with the level of sophistication and advancement for such an ancient civilization that existed for centuries before the Rome was even a remote village on a hill.

From Tarquinia, a drive through the land of the the ancient Etruria will take you to  the sleepy historic town of Tuscania (not to be confused with Tuscany). 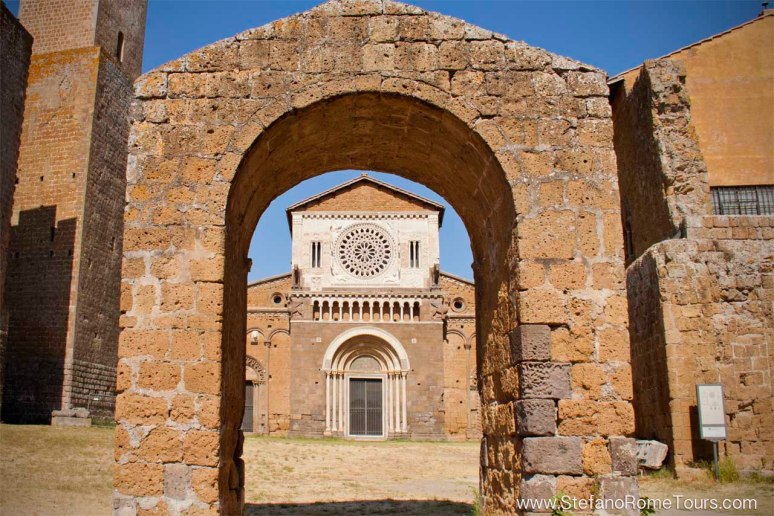 Church of San Pietro in Tuscania

Tuscania was also an ancient Etruscan city state, however, today it boasts Medieval glories that can be seen in its imposing city walls, medieval towers, and Romanesque Churches of San Pietro, and Maria Maggiore that boast finely decorated facades with elaborate carvings, complex iconography and rose windows.

Before leaving, a must is a visit to the terrace garden that will reward you with a spectacular view of the valley with the churches and fortress ruins in the distance that poets referred to as the most beautiful valley in all of Italy, the Etruscan valley of Tuscania.

For history buffs, Ostia Antica and Cerveteri Shore Excursion from Civitavecchia combines the best of Italy’s most significant ancient civilizations:  the Etruscans and the Romans.

This tour will take you to the ancient Roman city of Ostia Antica, lunch in the Medieval hamlet of Ceri, and will conclude with an exploration of the ancient Etruscan necropolis of Cervereri (for Ceri and Cerveteri see the Countryside Splendor tour above). 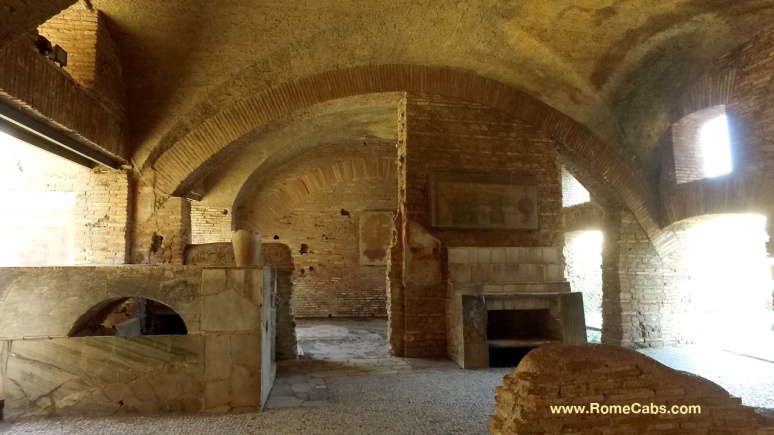 For all these tours and more, please visit our website where you will find a wide variety of Day Tours, Shore Excursions from Civitavecchia, Livorno and Naples, Sightseeing Transfers, and local airport and Civitavecchia Transfers.

Thank you very much for reading our 5 Top Rome Sea Port Tours from Civitavecchia – with RomeCabs blog post.  We look forward to showing you beautiful places in Italy!

5 Romantic villages near Rome you should visit – RomeCabs