10 Must See Places in Rome in A Day

Rome was not built in a day, but you can certainly enjoy the best Rome has to offer in a single day with our Rome in A Day Tour and Shore Excursion.

Below are the 10 Must See Places in Rome in A Day.

.
You can also WATCH these 10 Must See Places in Rome in A Day by clicking to play the VIDEO below:

The Colosseum is the enduring iconic symbol of the Eternal City of Rome and a vestige of its ancient imperial splendor and glory.

The elliptical stadium’s official name is Flavian Amphitheater, built in 72 AD by Emperor Vespasian who was a member of the Flavian dynasty.

The name Colosseum is merely a more recent “nickname” given possibly during the middle ages in reference to the colossal bronze statue of Emperor Nero as the pagan god Apollo. 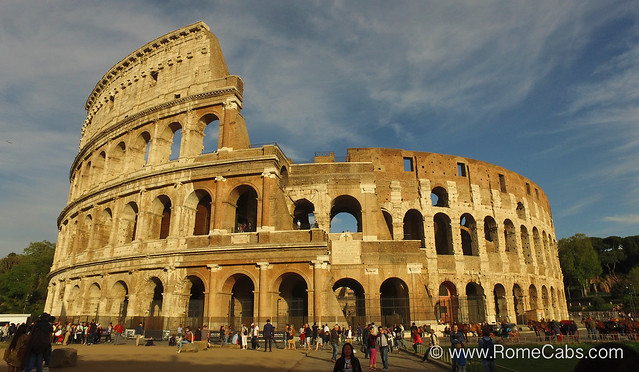 Not far from the Colosseum is Circus Maximus, the once enormous stadium where chariot races took place (as in Ben Hur) for the pleasure of Roman populace and the nobility who also had the privilege of living on the imperial Palatine Hill overlooking the Circus Maximus.

Although now all that remains is the outline of the ancient stadium, it is quite an impressive view with the Palatine Hill forming a majestic backdrop.

Roman Forum – Rome in A Day Tour with Rome Cabs

You can enjoy a panoramic sweeping view of the Roman Forum from a terrace tucked away behind Capitoline Hill.

If you don’t have the time to visit BOTH the Colosseum and Roman Forum but would like to get a good look at the amazing place from where the Roman Empire was ruled for centuries, this spot will do it!

To your right you will see the Palatine Hill ruins, and also the Colosseum peeking through on the other side of the Roman Forum

No wonder this is one of the most photographed view in Rome!  So don’t forget your cameras when you arrive here.

The Pantheon – Rome in A Day Tour with RomeCabs

One of the Must See monuments in Rome is the Pantheon, the ancient Roman pagan temple turned Christian church has inspired artists,  mystified historians, and educated architects around the world throughout its 2,000 year old existence.

For some fascinating insider look into the Pantheon, we invite you to read:

10 Unique Facts about the Pantheon you probably didn’t know 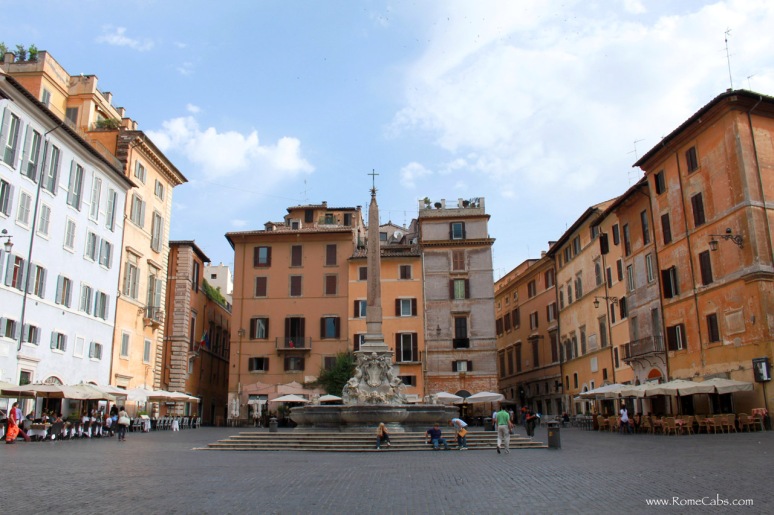 If only the Pantheon could speak, the stories it would tell about the evolution of Piazza della Rotonda, the small rectangular square that faces the monument.  The square takes its name from the informal name of the Pantheon that was converted into the Church of Saint Mary and the Martyrs:  Santa Maria Rotonda (as in rotund, the shape of the monument)

For centuries this small square has been suffocated with a labyrinth of sheds and small shops that sprouted around the monument until Pope Eugenius IV’s demolished all the makeshift market in 1430’s. However, the square continued to serve as a market well into the late 1800’s.

Today, Piazza della Rotonda is enjoyed by locals and visitors who visit the Pantheon, sit on the steps of the central fountain to enjoy the atmosphere, or enjoy lunch or dinner at the various restaurants in the square with outdoor tables.

The central fountain (Fontana del Pantheon) was created in 1575 and the ancient Egyptian  originally made by Pharaoh Ramses II for the Temple of Ra in Heliopolis (currently known as Obelisco Macuteo) was surmounted later in 1711. 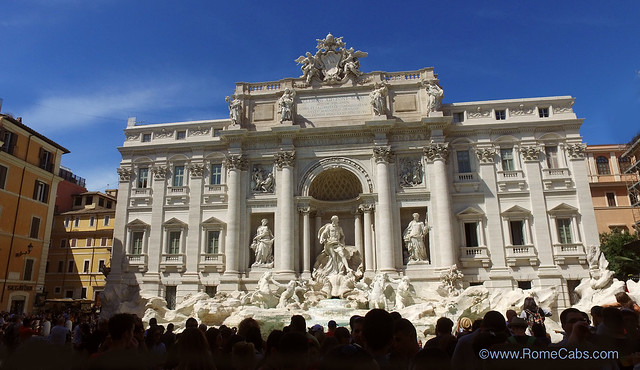 The Trevi Fountain does not need an introduction, it’s the most famous fountain in the world and among the most well recognized icons of Rome.

The 85 foot tall fountain is comprised of a facade made of travertine, impressive statues carved out of white carrara marble,  and a reef with a pool of crystal blue water below.

An imposing ensemble of a tall statue of pagan god Oceanus carried on a chariot led by two sea horses jockeyed by 2 Tritons dominates the fountain.

The backdrop facade is architecturally adorned with a triumphal arch in front of which Oceanus is standing, and two large statues of Abundance and Health.

Tradition holds that if you toss a coin over your shoulder into the Trevi Fountain, it will ensure a return visit to the Eternal City.  Our return clients who have tossed their coins in the fountain agree that the tradition holds true 🙂 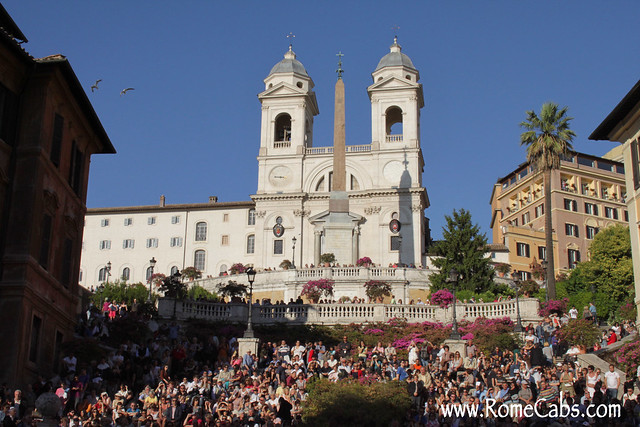 The Spanish Steps taking its name from the nearby Spanish Embassy, is an elegant yet monumental early Baroque stairway that unfurls to connect Piazza di Spagna below with the Church of Trinita dei Monti above.

The stairway was built in mid 1720’s to link the Bourbon Spanish Embassy and the Trinita dei Monti Church above, to the Holy See in Palazzo Monaldeschi below.

Today, this beautiful stairway is enjoyed by visitors and locals alike who not only use it to reach the upper and lower areas that the stairway connects, but to have a sit on its welcoming steps for a rest or to enjoy the scenery.

The fountain at the foot of the Spanish Steps is Fontana della Barcaccia (The Fountain of the old Boat), built by Pietro Bernini – the father of the world famous sculptor and architect Gian Lorenzo Bernini.

On the right corner of the square in one of the soft colored buildings is the house where English poet John Keats lived and died in 1821. Currently it is a museum dedicated to his memory and it houses memorabilia of his generation. 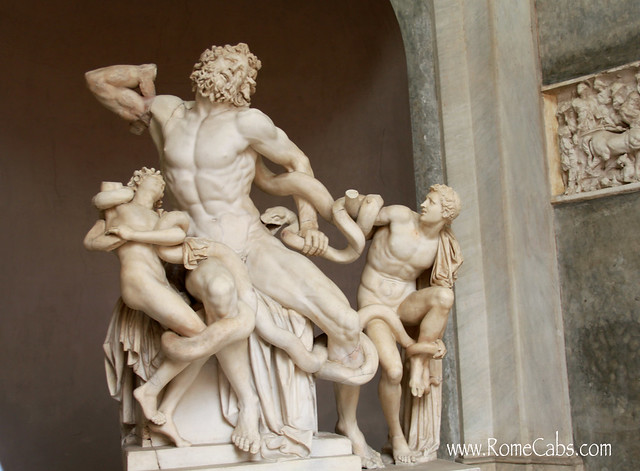 The Vatican Museums is one of the most incredible museums in the world with masterpieces of paintings, frescoes, sculptures, and archaeological findings from ancient and early classical eras to more contemporary times.

The Sistine Chapel is named after the pope who commissioned it in late 1400’s,  Pope Sixtus IV della Rovere, who wanted to have a large space built where the Cappella Magna (a medieval fortified fall that the Papal court used to gather at).

The Sistine Chapel is also where cardinals gather to elect a new pope (the conclave) in secret.

The Sistine Chapel is most famous for Michelangelo’s breathtaking frescoes that adorn the ceiling and the wall.

Various Florentine painters such as Botticelli, Ghirlandalo, Signorelli and Umbrian artists Perugino and Pinturicchio contributed paintings of biblical stories on the side walls divided horizontally in 3 sections.  The lower part of the walls below these series of paintings were frescoed into realistic Damask type draperies with the pope’s coat of arms. 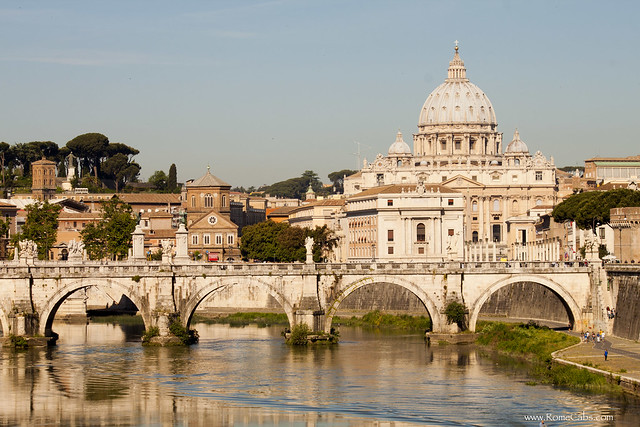 Saint Peter’s Basilica is the Papal Basilica of Saint Peter in the Vatican, the most important and largest church in Christendom.

The current Saint Peter’s Basilica was commissioned in 1506 at the command of Pope Julius II to replace the earlier 4th century basilica that was built by Emperor Constantine on top of the burial site of Saint Peter, one of Christ’s Apostles.

Construction lasted 120 years by the time it was completed in 1626 (if you can imagine, generations of people lived without seeing the Basilica incomplete).

Saint Peter’s Basilica is breathtaking inside, and vast and lavishly decorated with stunning sculptures, architectural elements, and mosaic paintings.  The most noteworthy are Michelangelo’s Pieta, Bernini’s bronze baldacchino (the altar canopy), and the sanctuary containing the symbolic Chair of Saint Peter.

The American philosopher Ralph Waldo Emerson described Saint Peter’s Basilica as: “an ornament of the earth … the sublime of the beautiful.”

To visit ALL these sites in a single day, we recommend our popular Rome tour that will take you to all the sites in comfort and style as you enjoy Rome in the comfort of your private deluxe vehicle driven by your personal English speaking Driver at your disposal to ensure your day in Rome will be your most memorable day in Italy!

ROME IN A DAY TOUR

ROME IN A DAY SHORE EXCURSION FROM CIVITAVECCHIA

Thank you very much for choosing Stefano’s RomeCabs.

We look forward to showing you Rome!