Buon giorno, and welcome to our RomeCabs Photo blog.
Rome is rich in thousands of years worth of history, architecture, beauty and charm that a lifetime does not seem long enough to discover all of Rome’s ancient secrets and hidden treasures.
The Eternal City has accumulated a LOT of things to see and do in its 2,700 years of history. And of course, with so little time to see and do everything on a visit to Rome, it’s important that you don’t miss out some of the exciting things makes Rome one of the world’s most visited cities and top tourist destination!
Go here to Read the Full Blog post Top 10 Must See places in Rome, and enjoy the Photo Gallery below with brief descriptions.
Click on the video below to WATCH “Top 10 Must See Places in Rome” Video by Rome Cabs.

The Colosseum was originally named the Flavian Amphitheater, and it’s the largest elliptical amphitheater in the world, and one of the Seven Wonders of Ancient Rome.

It was initially built by Emperor Vespasian in 70 AD, and it was completed in 80 AD by his successor Emperor Titus.

The name “Colosseum” is a nickname given to this massive monument after the colossal golden statue of Nero as the pagan god Apollo that once stood next to the Flavian Amphitheater.  The statue was eventually taken down and its bronze reused, but the name has survived to this day.

The iconic image of the Colosseum is also found on the Italian 5 cent Euro coin.

The Roman Forum (Foro Romano in Italian) is an large rectangular open forum that was Ancient Rome’s religious, political, judicial, and commercial center.  The Roman Empire was ruled from this public space.
.

Roman Forum from Above

One of the most fascinating museums in the world, the Vatican Museums features 54 spectacular galleries with precious paintings and frescoes by Leonardo da Vinci, Michelangelo, Caravaggio, Raphael, Titian and other great masters of the Renaissance.

Ancient classical sculptures known world wide such as the Laocoon, Apollo of Belvedere, and the Belvedere torso have fascinated artists and historians for centuries.

The Vatican Museums leads to very much anticipated Sistine Chapel where Michleangelo painted is famous ceiling and the Last Judgment frescoes.
.

Rebuilt in the 1500’s under the direction of Pope Julius II to replace the ancient 4th century Constantinian basilica, Saint Peter’s features remarkable works of art by Bernini (the Baldacchino that towers over the papal altar) and Michelangelo ( the Dome of Saint Peter, and of course his famous Pieta that he sculpted at only 24 years of age)

The Pantheon is the oldest ancient structure in Rome that has been in continuous use since it’s ancient Roman origins.

Rebuilt as we see it today in 126 AD by Emperor Hadrian as a pagan temple, the Pantheon owes its intact survival to having been converted into a Christian church in 609 AD and consecrated to Saint Mary and the Martyrs.

This ancient temple is currently also a tomb for Italy’s kings and queen, and the famous painter Raphael.

This imposing Mausoleum along the banks of the Tiber River once belonged to Ancient Roman Emperor Hadrian (who also built the Pantheon).

Due to its formidable structure, the mausoleum was converted into a military fortress during Rome’s chaotic middle ages when sieges were common.

The Passetto di Borgo (the covered corridor) connected Saint Peter’s Basilica to Castle Sant’Angelo so Popes could take quick refuge whenever Rome was under assault by its enemies.

Named after the nearby Spanish Embassy, the Spanish Steps connects the French Trinita dei Monti church above, to the Renaissance Fontana della Barcaccia below (the water fountain in shape of an old sinking boat) created by Pietro Bernini, the father of the famous Gian Lorenzo Bernini.

Just to the right of the steps is the Keats-Shelley Memorial House, a museum commemorating the famous poets John Keats and Percy Shelley.

The large sweeping stairway has become a gathering place for locals and tourists who enjoy passing the time and watching the world go by.

No visit to Rome is complete without a visit to the Trevi Fountain to continue the long lasting tradition of tossing a coin to ensure a future visit to the Eternal City.

Featured in many classic films such as La Dolce Vita and 3 Coins in A Fountain, the Trevi Fountain is one of the most well recognized and beloved fountains in Italy!

Piazza Navona is one of Rome’s liveliest squares, lined with charming outdoor cafes and restaurants, and filled with locals, tourists, artists, vendors, musicians and just about everything you can think of!

The square takes its elongated shape from the outline of the 1st century AD Roman stadium built by Emperor Domitian upon which the square was built. Beneath the square is a labyrinth of remains from the ancient stadium itself!

The focus point of Piazza Navona is Gian Lorenzo Bernini’s spectacular Fountain of the Four Rivers topped with an ancient Egyptian obelisk.

Trastevere (translated to “beyond the Tiber”) is one of the most delightful Roman neighborhoods with all the old world charm that you can imagine.

Cobble stone streets and elegant buildings of another era with aged earthy facades and hanging ivy give Trastevere its unrivaled appeal that attracts so many visitors and locals alike.

Thank you for visiting our Photo Blog. We hope you enjoyed our photo journey of Rome!

Below are more TRAVEL TIPS from Stefano’s RomeCabs:
.

Should I book my transfers and tours in advance? 6 Reasons why you should

For transfer services in Rome, please click the options below:

~ VIP Transfers from Airport to Rome

The Following Day Tours and Shore Excursions include the sites features in the Top 10 Must See Places in Rome:

.
~ Rome in A Day tour and shore excursion

Thank you very much and if we can be of service to you in Rome, please visit our website at http://www.RomeCabs.com.

We look forward to show you Italy!
~ The RomeCabs Team 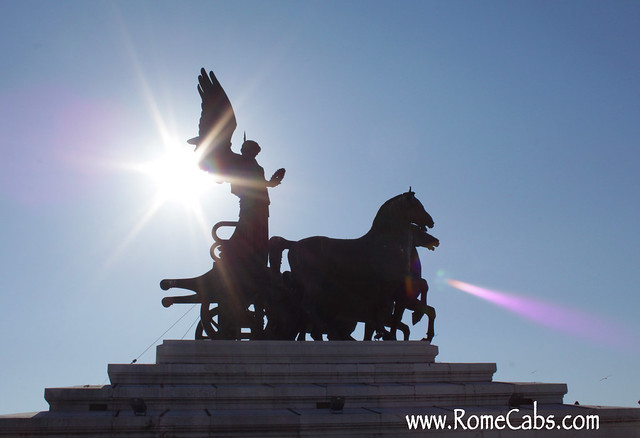