Instead Of the Colosseum…go HERE

The Colosseum is the grandest ancient Roman monument and the icon of Rome. It’s also one of the top most visited sites in Rome drawing huge crowds thus creating long lines for tickets and/or to clear security.
.

Even though the number of persons visiting the Colosseum at a time are capped at 3,000 (much less than the 50,000 spectators that the Colosseum was able to accommodate during ancient times), you would find it to be quite crowded.

If when visiting the Colosseum you find the lines too long or the monument too crowded and you’d like to see something different nearby, we have a few options for you with No crowds, No security lines, No advance tickets required:
.

Instead Of the Colosseum… go HERE:

With significantly fewer visitors you almost feel as though you have this imperial bath complex to yourself as you imagine what it must have been like in 3rd century AD when it was built with tall walls and ceilings  luxuriously adorned with  statues, marble, mosaics, and more. 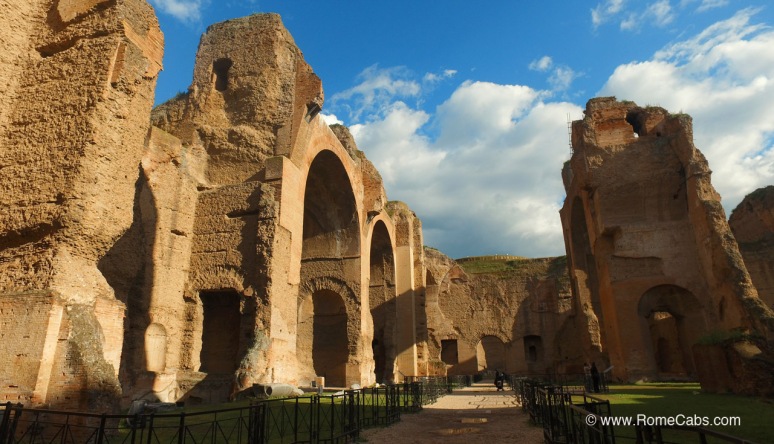 Baths of Caracalla with RomeCabs.

Even though Emperor Caracalla ruled for only 6 years between 211 – 217 AD, he initiated the construction of what would have become one of the ancient world’s most impressive Roman public baths. As with many other ruthless Roman emperors, Caracalla was also assassinated and never saw the completion of his dream imperial baths.

It is estimated that about 13,000 prisoners of war, 6,000 tradesmen, 21 million bricks, and about 6,300 cubic meters of marble was required to complete  Rome’s 2nd largest bath complex.

When it was complete, the imperial baths of Caracalla included a park (you can still enjoy a shaded rest on a bench as you take in the immense structures around you), swimming pools, public libraries in both Greek and Latin, gymnasium, frigidarium (cold rooms), tepidarium (warm rooms), and caldarium (hot rooms).  The bath complex was not just for bathing, but it was a social gathering place for leisure, study, or business meetings.

The Baths of Caracalla were open to everyone at no charge (upper and lower class had free access to public baths), and was able to accommodate up to 1,600 bathers at a time. The buildings were heated by a hypocaust – and underground heating system where burning wood or coal heated water provided by a dedicated aqueduct.

The baths were in continuous use for 400 years until it was destroyed in the 6th century by the Ostrogoths during the Gothic War.

Although nowadays  it stands largely in ruins due to damages caused by man and nature, the Baths of Caracalla have inspired architects and visitors worldwide for centuries.

For more information on our SEVEN WONDERS OF ANCIENT ROME tour that includes a visit to the Baths of Caracalla, please visit our website.

.
Just across the Colosseum is the Roman Forum, one of the most well recognized ancient Roman ruins in Rome.

You can use your Colosseum tickets to visit the Roman Forum and Palatine Hill.  Here you won’t find extensive lines as you would at the Colosseum, and with such a wide open spaces it will never feel crowded.

Rested in a shallow valley between Capitoline Hill and Palatine Hill, the Roman forum has been the most famous meeting place throughout history.

For centuries the Roman Forum stood as the center of public life for the Romans. It was their political, religious, judicial and commercial (and sometimes even entertainment)  hub. People still gather today as visitors – about 4.5 million visitors each year. 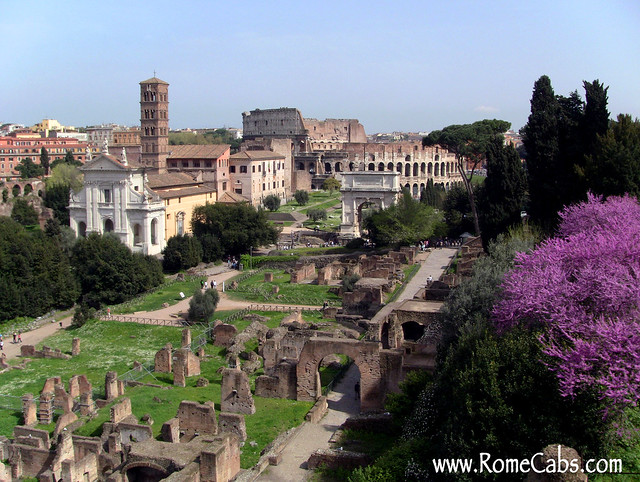 Scattered ruins of pagan temples and buildings offers visitors a glimpse of what the Roman Forum was like doing the glory days of the Roman empire.

The Roman forum developed over time as it grew in importance and in architecture filling the form with large public buildings and temples the dramatically reduced the open area where people can gather.

You can enjoy the remains of the once impressive Temples of Castor and Pollux, Vesta, Romulus , Saturn, Caesar, Antonius and Fausta, and more.

Triumphal arches in the Roman Forum are the Arch of Titus and Arch of Septimus Severus.

Basilicas of Ancient Rome include Maxentius and Constantine, Julia and Aemilia.

.
Just beyond the Colosseum on the quiet Celio Hill, is a rather obscure church with a amazing Ancient Roman underground complex waiting for you to explore it.

Paul and John were 2 Roman Christian brothers and soldiers who were martyred during the reign of Emperor Julian the Apostate in late 4th century AD during. It is said they were buried in their house on Celian hill (instead of burial tombs outside the city walls as it was the norm).

The Basilica we see today was built at the start of 5th century AD by Senator Pammachius – an affluent Roman and prominent Christian, and possibly the last owner of the residential complex upon which the church was built.

You can enter the Case Romane from Clivus Scauri – one of the most significant ancient Roman streets on Celian Hill. The entrance was once the portico of shops that were once located along this street.

By 2nd century AD, this area was occupied by a “domus” –  luxurious 2 level residential building  that was built parallel to Clivus Scauri.

By 3rd century, an “insula“– an  apartment building,  was erected with shops on the ground floor and apartments on the upper floors.

At the beginning of 4th century, a prominent individual purchased the domus and insula complex and integrated them into a large luxury residence.  If you fast forward time several decades, you’ll arrive at the time when the 2 brothers John and Paul lived here before they were martyred.

It was on top of this residence that the basilica was erected at the behest of Senator Pammachius – perhaps also the last owner of the residence.  Most of the structures on the property were abandoned so the foundation of the church could be built on top, however, some areas were still accessible over the centuries as indicated by a medieval oratory discovered there.

Upon visiting the Case Romane, don’t miss these important rooms:

ROOM OF THE GENIUSES 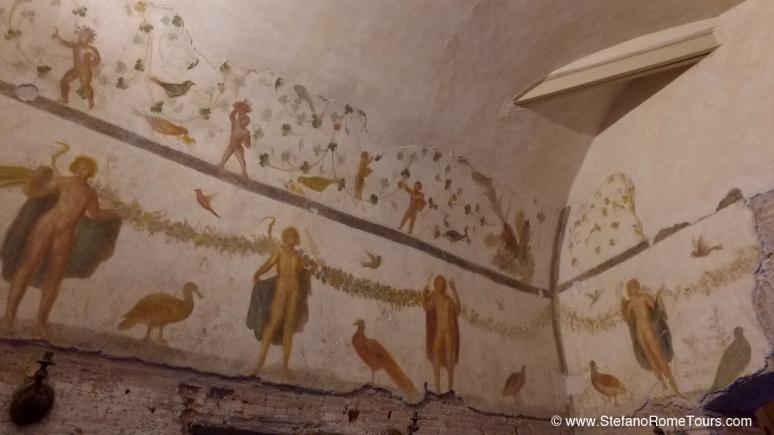 Upon entering the Roman Houses you will step into the Room of the Geniuses (or “geni” – Roman mythological spirits believed to present in every living being and objects).

The upper walls are painted with two bands of stunning paintings  of youthful winged nude figures (possibly the geniuses), garlands of  flowers and fruit. Above this scenery, grape vines meander among cupids and exotic birds.

ROOM OF THE FAUX MARBLE 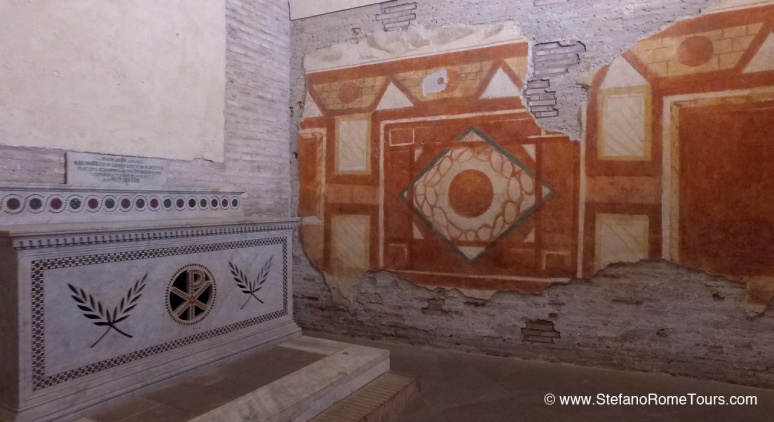 Marble was precious and pricey in the ancient times as it is today, and decorative marble inlaid into walls to create patterns of images (opus sectile) was sometimes imitated with paint in a cost saving attempt.

ROOM OF THE ORANT

The most ornate room is the vaulted Room of the Orant (Worshipper), named after the subject painted on the wall. Painted during the 4th century, the frescoes depict Roman figures of philosophers, mask of Slienius, a female theater mask, fantastical monsters, sheep,

Acanthus leaves and faux alabaster opus sectile that decorate the lower part of the walls. 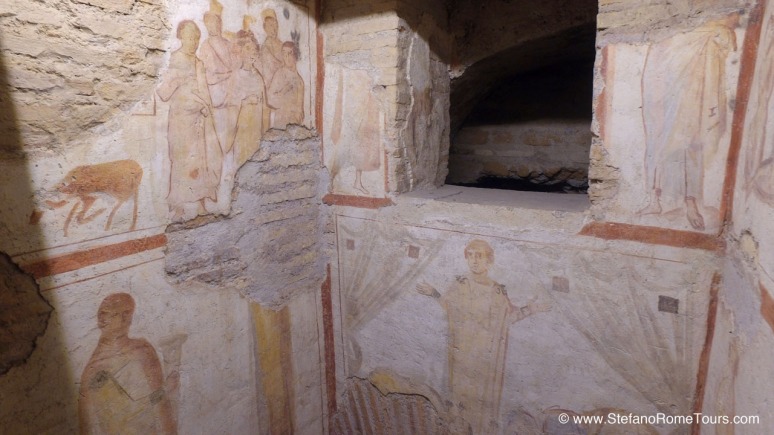 .
By mid 4th century, a small chapel (a confessio) within a niche was constructed where so visiting pilgrims would able pray before the painted Christian scenes that are still very well preserved.

THE NYMPHAEUM OF PROSERPINA 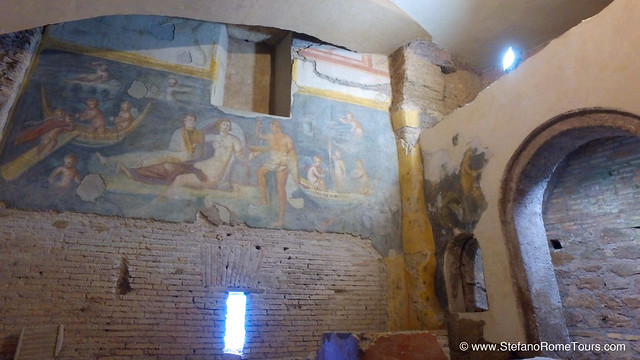 Originally, the nymphaeum was an interior roofless courtyard that separated the residential and commercial buildings from one another. Niches, fountains, frescoes and mosaics are well preserved and quite remarkable to view.

The large late 3rd century AD fresco on the upper part of the wall depicts mythological scenes taking place at sea. If you look down you will notice the original floor made of multi colored marble pieces.

In an adjacent alcove, you can admire the black and white tile floor with geometrical and floral motifs.
.. 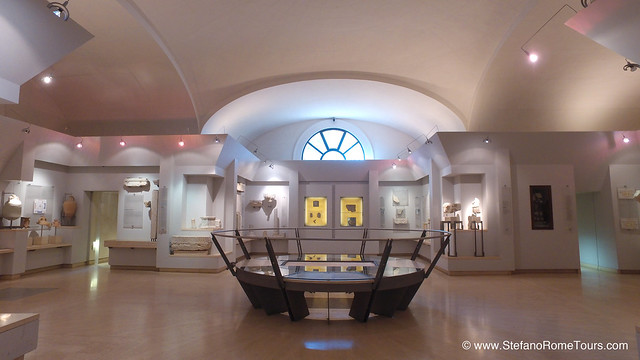 Last but not least is the Antiquarium – the museum where the ancient Roman and medieval artifacts excavated on this site are on display for you to better understand the local lives of Romans and what they used in their daily lives,

Located right below the Chapel of Saint Paul of the Cross, the museum is in the shape of a Greek cross. Here you will find a variety of ancient Roman and Medieval objects excavated between 1887  and 1936.

Don’t miss the opportunity to also visit the Basilica of Saints John and Paul. It has a magnificent interior reminiscent of a early 20th century ballroom with delicate hanging chandeliers. No wonder it’s a popular church for wedding ceremonies.

For more information on our POSTCARD ROME TOUR FOR CRUISERS that includes a visit to the Roman Houses, please CLICK HERE.

Thank you very much for choosing Stefano’s RomeCabs for your Transfers and Tours in Italy.

For more information on our services please visit our website below:

One thought on “Instead Of the Colosseum…go HERE”